KASHMIR ‘PARADISE’ RUNS OUT OF WATER 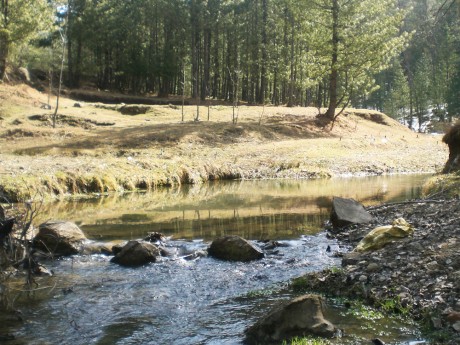 The sweet fragrance of saffron fills the air. Nearby are snow-capped mountains, fruit orchards and splendid lakes, scenes which moved the 16th century Mughal emperor Nurrudin Muhammad Jahangir to describe Kashmir as paradise on earth.

The ceasefire line which divides Pakistan-administered Azad Jammu & Kashmir from Indian-administered Jammu and Kashmir lies 23 kilometres away. Life is peaceful today in this part of the disputed region.

With peace there comes another challenge. Water, which was once abundant in Rawalakot district, is now drying up. Groundwater levels are 250 ft below the earth, while 50 years ago, they were closer to 70 ft deep.

Residents in Banjosa village believe the problem stretches back for two decades but say that in recent years it has become worse.
Sitting at roadside wooden bench Muhammad Naseem Khan, 50, a junior school teacher says water shortages are easy to spot. “Only three fountains out of eight left in area, which is alarming,” he says.

“We were growing tons of rice, maize and potatoes earlier, had healthy livestock but due to low rain, dry fountains and streams, even growing wheat is challenging,” adds retired army employee Muhammad Mumraiz Khan.

Women, whose job it is to provide household water are travelling further and further in the search for fresh springs.

Faiza, 18, is on her way to Dana Kottehri, a small village next to Banjosa, “I have to travel six km to attend school and further three km to get one gagar (pot) of water and mostly [I am] carrying water three times a day,” she says.

“It’s really hard to fetch water in a mountainous track on daily basis, spending half the day in school and rest of that in fetching water, grabbing most of my study hours, attending school with pain in my body.”

As we enter the small village of Danna Kottehri, another woman is pouring water in gagar and used oil cans through a motor driven pump.

Nussrat Khanam, 25, explains that an average household needs between 10 and 12 pots of water a day. Fetching this takes up most of her day. “I have invested my life for water fetching exercise but in return nutrition, health, education [are] still a distant dream” she says.

Asif Hayat, the sub-divisional officer at the public health department in Rawalakot says over-exploitation of water resources is to blame for the shortages. “The rapid increase in population and massive plantation of alien plants like eucalyptus are the main factors [to blame for] lowering water tables,” he explains. Fast-growing eucalyptus trees have been planted for cash crops, but have also been linked to the depletion of ground water levels.

Unpredictable weather is adding to the problem. Prolonged dry spells are followed by unexpectedly heavy rains and there is less snowfall. Asif Hayat explains that winter is arriving later and heavy rains are now common in summer.

Muhammed Yaqoob Khan, now in his 80s, has lived in Azad Kashmir since the 1930s, “In my 20s, I witnessed five or six feet snow falling from late October until mid March, now winter is approaching late in November and weather is getting warmer after mid February,” he says.

With slight pause and worried expression, he says, “Now it’s different, we were not using fans at home, but now it’s essential during summers. It’s really amazing in a mountainous area, isn’t it?”

Changing weather patterns means the government must get better at planning resources, says Dr. Asif Shah, an environmental scientist and director general of AJ&K (Azad Jammu & Kashmir) Earthquake Reconstruction & Rehebilitation Agency (SERRA) says.
“More care is needed in utilizing water resources across Kashmir and Pakistan because in the wake of recent events like 2010 floods, heavy rains and drought, it seems climate is changing at unexpected pace.”

The district government in Rawalakot has recently built additional water tanks, but local residents say this is not enough.
Rawalakot’s deputy commissioner Sohail Azam says there are abundant water supplies in the country. The challenge is to build the infrastructure.

“We have abundant water resources in Singara and working on Singara Water Supply Scheme with Chinese assistance,” he says. “After completion in 2014, this project would meet 0.1 million gallons per day water requirement of Rawalakot city alone.”

“We are planning the same for rural areas to develop small water reservoirs,” he adds.

This feature was produced by Faisal Raza Khan as part of a fellowship with the Climate Change Media Partnership, an initiative of Internews, IIED and Panos. This article was originally featured on Panos London Website.