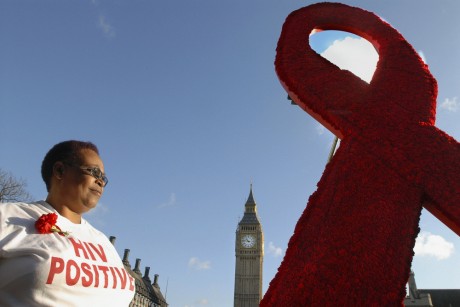 On a chilly, grey Wednesday, I find myself turning heads on Acton, West London, largely because I am in the company of a beautiful young woman who talks brightly about an issue many associate with death.

“Maybe we should go in here,” the woman says, slowing down near a hair salon inside which half a dozen black and Asian men are already looking at us through the glass window.

“Hi, I am Wossen from the Naz Project London and we are distributing information for your customers about HIV testing and counselling,” Wossen starts, offering a firm yet graceful handshake and looking straight at her smiling, genial host.

About 30 leaflets with information about HIV testing, condoms and telephone numbers to call, plus a dozen condoms, are deposited here. We move on, looking for another potential target. In two weeks Wossen will return to monitor uptake of the information. She will be hoping that each leaflet will have helped one person wake up to the reality of HIV/AIDS, a condition compounded by ignorance in a largely knowledge-based society.

Wossenyelesh Tamene is one of the soldiers in this one of many battles in the war against HIV in the United Kingdom. As Wossen’s leaflets shout, one in three people with HIV in this country do not know that they have the virus that causes AIDS. This means they do not get timely proper medical care, and they could unknowingly infect their sexual partners.

Naz Project London (NPL), based in Hammersmith in west London, is one of many organisations working in health promotion in minority communities and supporting people affected by HIV.

On Churchfield Road, Wossen is looking mainly for shops with people of African or Asian descent. She pushes a door into another barber’s shop with one Asian attendant, whose eyes dart questioningly from Wossen’s face to mine. A fleeting frown shows his disinterest in Wossen’s HIV talk.

But just then his boss marches in and warmly greets Wossen. Yes, we can leave some material, but not many condoms. “Some people do not believe this HIV thing,” the boss says pitifully. “The Somalis for instance? They don’t want to hear about it.”

Wossen’s race-centric strategy has a logic. As Dr Wondwossen Eshetu, NPL’s director of programmes, tells me, 2009 statistics showed that 44 per cent of HIV cases in London came from black ethnic groups; 44.5 per cent were from men who have sex with men (MSM). Hence a key approach to HIV today is to target such communities with information to encourage people to get tested and, if positive, seek treatment.

“But testing is a very difficult issue,” Dr Eshetu says.

“You cannot just go into a community and say, ‘Come on you guys, come and get tested’. No one is going to come… You have to give education everywhere, in the community, seminars, workshops, using the media of all sizes, small media, big media.”
The efficacy of approaches like Wossen’s may be difficult to measure.

NPL has five coordinators like Wossen, each of whom leads a team of volunteers targeting a specific linguistic community – South Asians, various Muslim groups, Portuguese speakers, Spanish speakers, and people from the Horn of Africa.

The volunteers walk the streets, go into clubs, pubs and other social places to spread the message. Wossen, however, is now alone. People, she tells me, usually volunteer for about six or eight weeks to get some work experience and go away. Her boss, Dr Eshetu, would like to have more volunteers, but everything takes money and funding is limited.

One thing that is not limited, for NPL at least, is space. In the office, conveniently located at the corner of a quiet street just two minutes’ walk from the bustling Hammersmith station, are two rooms.

Twice a week, on Wednesdays and Sundays, the lights in the counselling and HIV-testing rooms switched on as a nurse and health advisor from Chelsea and Westminster Hospital conduct counselling and testing sessions on appointment. They can only see up to four people on either day.

“Nowadays both days are fully booked,” says Dr Eshetu. “I would like to have the counselling and testing here every day of the week, but who is going to pay for it?”

It is in the under-utilised HIV-testing room that I meet Eduardo, a youthful NPL volunteer with a big, warm smile that belies a decade of turbulent health. Eduardo, 42, is wearing a light grey V-neck on top of a white T-shirt, jeans and simple grey sneakers.

A librarian by profession, Eduardo came to London from his native Colombia in 1999 for a master’s degree. In 2001, however, his asthma became uncontrollable. On advice of his GP, Eduardo took an HIV test at Charing Cross Hospital.

The result was positive.

“I was devastated,” he recalls the moment his GP hugged him and gave him the news.

“I was like, ‘oh my God what am I gonna do? How am I gonna tell my friends and my family?’ I thought I would get very thin, and that I would die soon.”

But the doctor reassured him. Five months later, he started anti-retroviral treatment, braved the initial side-effects and started volunteering to encourage others to get tested.

Eduardo believes it is the fear of rejection and stigma that keeps many people away from the testing rooms. He found fellowship in the NPL’s Naz Latina support group, which gets together at least once a month. And his boyfriend and sister stood by him, although the former would soon start blaming him for having brought the infection.

But he has never revealed his status to the wider family in the largely conservative Catholic Colombia.

“I told myself ‘my family don’t need to know’. If I tell them, they will imagine I am dying and I don’t want them to be worried,” Eduardo chuckles; the idea that one is dying just because they have HIV in the blood seems almost prehistoric. “I guess my health could be better than theirs.”

Eduardo glances at his watch. He should be going to the gym soon. Regular exercise and better diet are part of the “rescheduling” he had to do once he started treatment.

“At the moment I am very active,” he says, revealing plans to graduate with a third master’s degree and to get married next year. “I deal with Naz at different levels – I help with interviews, during big campaigns, and also I help users with a big smile, with my attitude.”

According to Carlos Corredor, the coordinator for Naz Latina, people like Eduardo are valuable ammunition in the war against stigma that surrounds HIV/AIDS. There are, Corredor says, no easy solutions: there is a need to make more people aware that the problem exists in the UK, how to prevent it, and how to get help.

Back in Acton, Wossen enters a salon where a woman is on the phone booking appointments into a large black book. Off the phone she listens keenly, and offers to keep “a few of the leaflets” but not the condoms. If we leave condoms on her counter, that will be too much, she says. Neither can she promise to interest her clients in the leaflets. We may leave them there and if someone wants they can take them.

“I understand you fully,” she says kindly.

“But I know my customers. You see, these things are very private. If I pick condoms and you see me, you will ask yourself what I am going to do. And you see me picking the leaflet, you may be thinking, ‘Is something wrong with her? You get what I mean?’”
A few blocks down the road, an elderly black salon owner impatiently waves us away.

“Ah-ah, please! Sorry. Not here,” she says, as a younger employee struggles to suppress her laughter. “I am too old for that. Those things are for small boys and girls who still run around.”

Sometimes it is a real struggle, Wossen sighs after the last stop. She is still upset about a barber who gave her an indecent handshake, instead of taking her leaflet, but she won’t let it put her down. More and more people, she says, are starting to pay attention – to the message.