FROM REFUGEE TO WEB DESIGNER, AT DADAAB 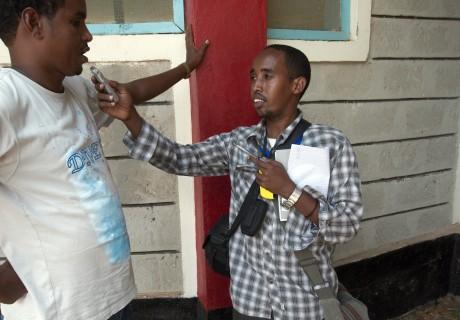 Mohammed Bashir Sheik was four when he arrived at Dadaab from Somalia with his mother and sister 18 years ago. The family, along with tens of thousands of others, had fled the civil war in Somalia, looking for refuge over the border in north-eastern Kenya.

His mother died when he was 14 and he grew up in the care of his sister.

“Survival in the camp was particularly tough after my mother died. The ration of 6kg of maize, 300g of oil and 400g of beans to last each person for 15 days was hardly enough,” he recalls.

So far Mohammed’s life chimes with the typical picture of a refugee. But that’s where it ends.

Meet Mohammed aged 22. He has never left Dadaab, the world’s largest refugee complex, but that hasn’t stopped him learning how to create and host websites, set up a small business and teach others how to use computers.

When he isn’t out interviewing people for a local newspaper produced in the camp, Mohammed can usually be found in the Hag youth ICT laboratory, tucked away in a discreet corner of Ifo2 camp, an extension of Hagadera, one of the three camps that make up the sprawling Dadaab complex.

The ICT centre, a brick building with a corrugated iron roof, flanked on both sides by shacks, is on the dusty, winding street. All around the clamour of everyday life in the camp goes on.

Three young boys are huddled in front of a computer. A gust of hot wind sweeps through the windows, leaving a film of dust on the keyboard and table but they don’t notice.

In the far corner of the room two girls clad in buibui (the Swahili word for the black shawl Muslim women wear to cover their heads) type animatedly on a mobile phone as they engage friends on Facebook. The scene could be straight from downtown Nairobi, East Africa’s ICT hub, except that this camp is nearly 500km from the capital, in an arid, isolated tract of north-eastern Kenya.

Even the nearest town, Garissa, is 120km away – a three-hour journey in dry heat and dust on off-track roads. Any visitors driving to the camp are asked to hire armed security guards for the final leg from Garissa to ward off possible threats from Al Shabaab militia.

Mohammed teaches them how to navigate the computer. The lab is the culmination of Mohammed’s passion for technology. He first learned how to use computers through mobile computer clinics offered in the camps’ schools by various NGOs. Unable to study beyond form four (the final year of the Kenyan secondary school system), Mohammed found computers offered him access to further education.

He learnt his fluent English by chatting online, and made friends from around the world who taught him further computer skills. One particular friend from Australia taught him computer basics via Skype. “It’s funny that I have not met my friend in person,” he says with emotion in his voice.

He says a visiting journalist suggested that he get a dotcom domain to enable him to design websites and earn a living. So far his clients have included community groups, schools and international organisations.

“I borrowed US$300 from a friend to buy a domain from a US-based company and was soon in business,” he says. For web design he says he earns about US$800 per project, while web hosting can bring in up to US$300 per month. He receives this in cash, usually through third parties, such as community leaders and NGO officials. He has also set up a shop in a makeshift canteen in the camp, where he sells groceries, such as milk, soft drinks, drinking water as well as school and office stationary.

A father of four, computers have given Mohammed a way to support himself and his young family. And now he passes on these 21st century survival skills to the next generation.

“I’m happy today that my life is testimony to how knowledge can transform whole communities not just individuals,” says Mohammed.

He set up the internet hub two years ago with a couple of friends after a Danish NGO invited youth groups in the camp to submit business proposals, with a US$12,000 prize for the best one.

“Ours was the winning proposal and we decided to invest the money in the project to help young people acquire computer skills.”
This year marks the 20th anniversary of the birth of Dadaab refugee camp. UNHCR, which manages the Dadaab complex, set up the first camps there in 1991 and 1992 following the civil war in Somalia that led to the fall of Mogadishu and subsequent overthrow of the central government.

Initially, the camp was meant to host 90,000 refugees. However, today, more than 463,000 people live there, including around 10,000 third-generation refugees. The situation is exacerbated by the on-going civil strife in Somalia and the worst drought in the horn of Africa in 60 years, which has led to more refugees pouring into the camp to escape chronic food shortages.

Kenyan politicians have been calling for refugees to be repatriated and the camps to be closed, saying Dadaab and other refugee camps are a drain on the Kenyan economy.

Yet a 2010 study, commissioned by the Kenyan, Danish and Norwegian governments, claims the Dadaab camps bring about US$14 million into the surrounding community each year, partly through sales of livestock and milk and other goods to the camps. In addition, Dadaab itself generates an annual turnover of around US$25 million in refugee-run businesses based in the camp.

Mohammed’s example shows how refugees can boost the Kenyan economy rather than acting as a drain. “The refugees’ human capital is immense,” says Dominik Bartsch, UNCHR head of operations in Dadaab. “The fact that the majority of the refugees now owe their allegiance to Kenya more than Somalia should be a motivation for the authorities to institute structures to enable the country to tap into the refugees’ potential for development.”

However, because of Kenyan labour laws and strict bureaucracy, refugees like Mohammed can’t hold permanent jobs. Mohammed can only earn maintenance wages – ‘incentives’ rather than salaries paid to refugees with professional skills but who cannot legally work in Kenya. The money is to cater for their immediate basic needs like food and clothing.

The amounts range from between KSh2,500 (US$30) to KSh5,000 (US$60) per month, paid mainly in cash by individuals or the organisations they work for. Since the refugees do not have permanent identification documents it is impossible for them to open bank accounts—there is not a single bank in the camps.

Refugees also can’t travel. There’s a strict curfew every evening and refugees can only leave the camps with special passes. Anyone caught without a pass can face arrest, detention or expulsion.

“It seems quite unfair that I should be treated this way in a country that I consider as my second home. It is as though I am being made to pay for the sins I did not committed by being isolated,” Mohammed says.

As the sun sets beyond the hills in Dadaab, its dying orange rays silhouetting the jagged manyattas (tents), the refugees return home thankful that they have seen off another day. Yet the feeling that they will wake up like second class citizens, unable to contribute fully to the economy or create their own future beyond the camps, leaves a bitter taste in their mouths.